Please note that each Myriad Network workstation is capable of providing upto four independent ‘spit’ outputs for adverts and jingles so if you only have four ‘spit outputs’ (FM, DAB, Web & Sky for
example) then you need only have a single Myriad Network machine.

The diagram below shows a simple, single site Myriad Network system with two main broadcast studios (with Myriad playout systems) which connect directly to the primary Myriad Network box. This single workstation is capable of supplying up to four independent outputs for adverts, branding and meta-data (for DAB transmission and websites). If more than four outputs or ‘splits’ is needed then an additional Myriad Network system can be added. 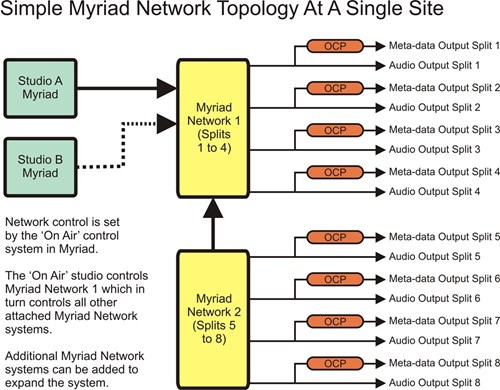 In this model, play information and advert / content duration on the secondary Myriad Network systems is not passed back to the studio Myriad system so only problems occurring on the primary Myriad Network system will be flagged up in Myriad in the studio. So for larger or more complicated networks, we recommend introducing the Network Manager software to further extend the functionality of the system.

Consider the diagram below. 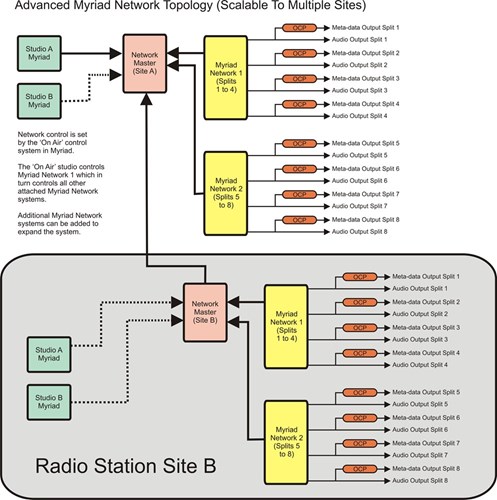 Where is starts to get more interesting is the fact that you can connect Network Master systems effectively ‘daisy chaining’ Myriad Network systems at different sites.

If you look at the bottom section of the diagram above you will see that there is a secondary site (called Site B) that has an identical setup to the initial site but with the option to have the Network Master in ‘Site B’ controlled by either the local studios or directly from the Network Master in ‘Site A’. This allows for ‘Site B’ to either have local programming that they control themselves (via Myriad in their studios) or network controlled programs controlled via ‘Site A’ but with local adverts etc.

As we have already touched on, one of the roles of the Network Manager application is to collate information about avert break / content length and play status and relay that to the controlling studio via Myriad. In the scenario where a secondary Network Master is connected to a primary Network Master, it passes it’s collated information back ‘up the line’ to the primary Network Master meaning that the information presented in the controlling studio is collated from the whole network. So an advert break will only be displayed as finished in the studio once all the Myriad Network splits have finished across both sites! There is, of course some safety checks in place to ensure that a faulty Myriad Network system at a remote site will not halt then entire network output.

The above scenario is very effective if you have a main site which provides ‘network output’ and secondary sites that can switch between local provision and network programming (but always with local adverts and branding).

But what if that was not the case, what about if each site needed to be able to provide ‘network output’ but only at specific times?

It would be common to run a copy of Network Director at each station to allow any site (with appropriate security policies in place at the station) to reconfigure the radio network as appropriate.

Now let’s imagine that we have a copy of Network Director at each station and that for the next two hours, we need all of the main audio for the network to come from site B but obviously with local
adverts and jingles at each site. 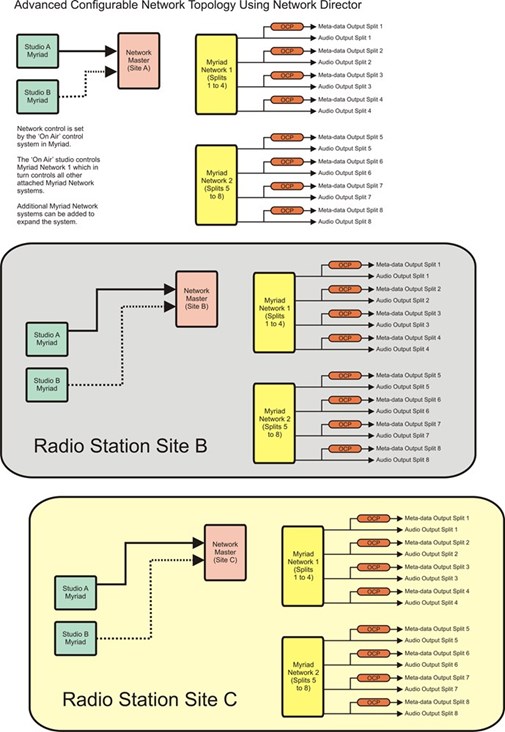 The diagram bellow shows the topology after Network Director has instructed all of the Myriad Networks to connect to the Network Master at site B. 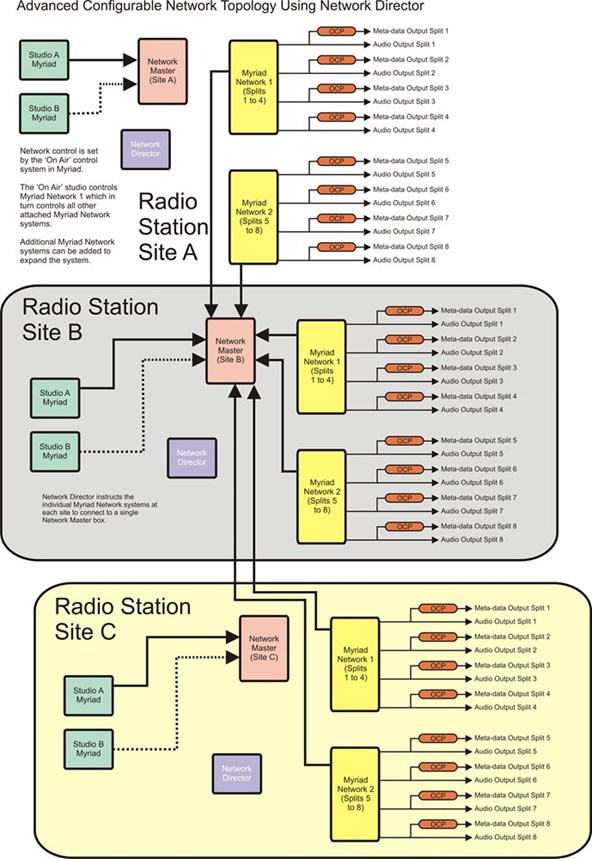 As you can see, this it different to the second scenario we looked at in that the Myriad Networks are connecting directly to the primary Network Master ignoring the local Network Master altogether.
This is necessary to allow the remote configuration of the network via Network Director.

In all cases, the individual studio that is driving the network is selected using Myriad’s standard ‘On Air Control’ feature.

By it's very nature, Myriad Network offers a wealth of potential network options for any radio group wishing to leverage the benefits of centralised resources whilst maintaining localised content and revenue. By mixing local and national advertising revenues you can maximise station income, reduce costs (by centralising playout) and maintain the local 'feel' to the station with location specific branding and information.

We have a wealth of experience in designing and deploying network radio solutions and will be happy to provide a bespoke solution to suit your group needs and infrastructure.

Click on the thumbnails to view the different Myriad Network topology options. 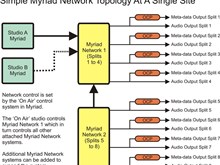 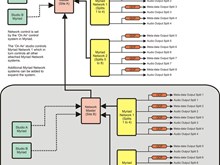 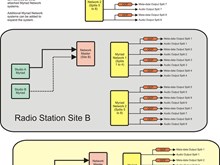 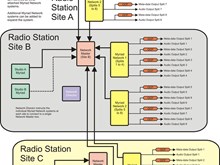 For a free, no obligation consultation and quote, please contact our expert team today.

Talk to the team at Broadcast Radio to see how our products could benefit your station.